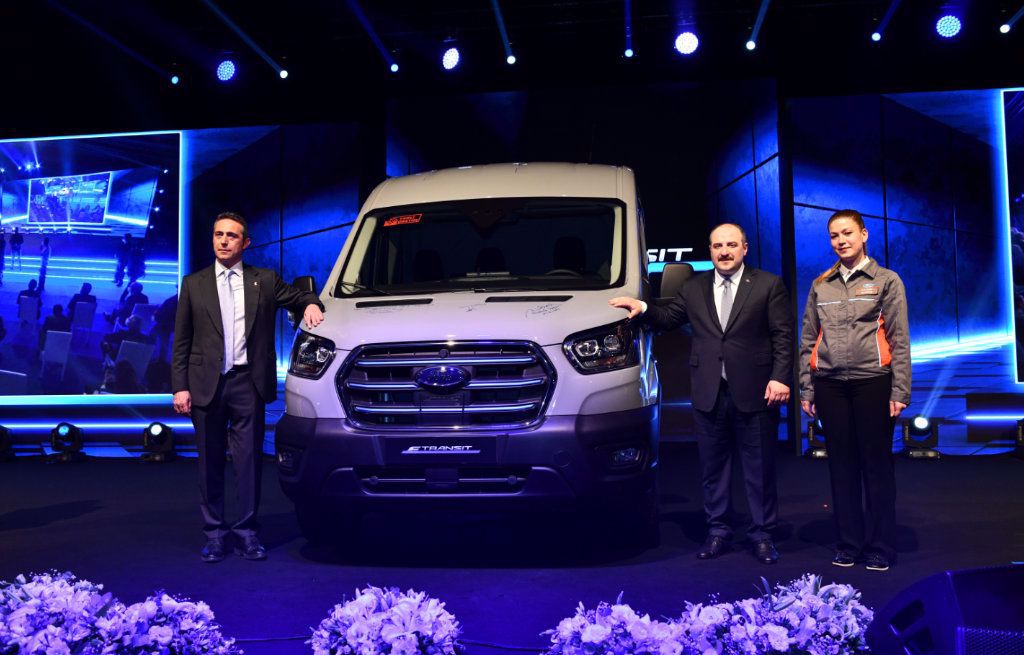 KOCAELI, TURKEY, April 7, 2022 – Ford Pro is now shipping the first production units of its all-electric E-Transit van to customers across Europe from the Ford Otosan factory in Kocaeli, Turkey.

This landmark moment was celebrated today at the Gölcük plant, in a ceremony involving Turkish government representatives, investors, employees and media.

Following strong early demand for E-Transit from European businesses – with over 5,000 customer orders received before vehicles roll off the assembly line – Ford Otosan is now moving to full mass production.

“Ford Otosan’s Kocaeli plant is the heart of Transit production in Europe, and this celebration of E-Transit manufacturing starts the electrified next chapter in our already strong partnership,” said Hans Schep, general manager, Ford Pro, Europe. “This is the first step in a transformation of the Kocaeli site which will see it become a major centre for electric commercial vehicle manufacturing in Europe.”

E-Transit is the all-electric version of the world’s best-selling cargo van 1 and the new vehicle spearheads the launch of Ford Pro in the region; this new business offers customers a comprehensive suite of software, charging, servicing and financing solutions fully integrated into a portfolio of world-class electrified and internal combustion-powered vehicles to help improve productivity and uptime, lower costs, and facilitate access to everything operators need on one platform built for the electric and digital age.

“Production of E-Transit in our Kocaeli plant, where the electricity is supplied with 100 per cent renewable energy, is a source of pride for us and another turning point in our increasing role in Ford’s electrification strategy” said Güven Özyurt, general manager, Ford Otosan. “We believe that electrification of the legendary Transit model is a major development and an important step for making Ford Otosan the production base of Ford electrified commercial vehicles.”

To meet demand for future electrified Ford models, Ford Otosan is investing €2 billion and growing employment by around 3,000 to increase vehicle production capacity, including for the next-generation Transit Custom model.

Ford’s move to an all-electric future in Europe was also highlighted by the recent announcement that Ford, SK On Co., Ltd. and Koç Holding have signed a non-binding Memorandum of Understanding for a new, industry-leading joint venture in Turkey. Subject to execution of a final agreement, the three partners plan to create one of the largest EV battery facilities in the European wider region. Production is intended to start as early as mid-decade with an annual capacity likely to be in the range of 30 to 45 Gigawatt hours.

Reaffirming its leadership as Europe’s top-selling commercial vehicle brand, Ford will continue to electrify its iconic Transit models to suit different customer requirements. By 2024, E-Transit will be joined by four additional new fully-electric models in the Transit family as Ford moves toward its target of zero emissions for all vehicle sales in Europe and carbon neutrality across its European footprint of facilities, logistics and suppliers by 2035.

Benefitting customers in the electric era

With its highly competitive range, payload, power and choice of bodystyles, E-Transit is designed to painlessly enable operators’ fleet electrification while accelerating their productivity through Ford Pro’s charging, telematics and servicing solutions.

Ford Pro has already proven E-Transit’s durability with demanding testing in high-tech facilities around the world. The company is now running a wider programme of customer pilots with a total of 60 pre-production E-Transits, including converted models, operating in typical daily use with customers across France, Germany, Italy, Netherlands, Norway and the UK, helping Ford Pro to optimise its always-on supporting products and services to deliver optimum efficiency and productivity for businesses.

1 Based on IHS Markit New Registrations data CY2014–CYE 2021, which is compiled from government and other sources and captures 95 per cent of global new vehicle volumes in more than 80 countries as reported in February 2022. Transit family-based volumes of vans, wagons, chassis cabs and cutaways include Ford Transit, Transit Custom. Excludes Transit Connect and Transit Courier.

2 The declared WLTP fuel/energy consumptions, CO2 emissions and electric range are determined according to the technical requirements and specifications of the European Regulations (EC) 715/2007 and (EU) 2017/1151 as last amended. The applied standard test procedures enable comparison between different vehicle types and different manufacturers.