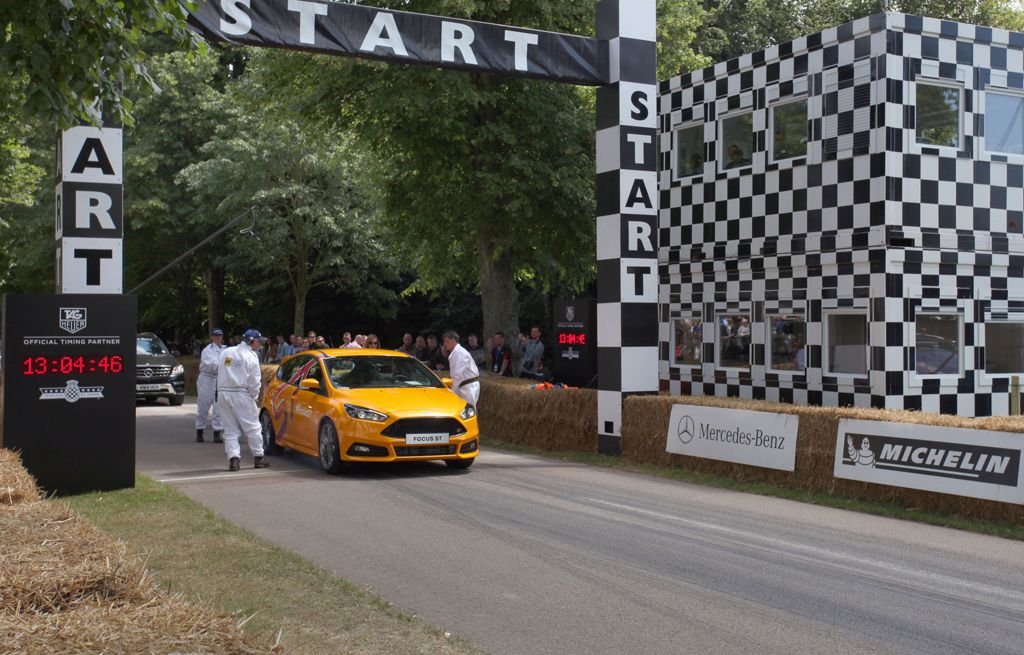 The first “virtual vs real” race to be held at legendary motor racing venue, Goodwood, ends in narrow victory for the real-life new Focus ST ahead of its virtual counterpart.

The New Ford Focus ST notched up a first victory hours after making its global debut – by winning a unique “virtual vs real” race. The new model went head-to-head against a virtual Focus ST after Ford and Sony Computer Entertainment staged the first such race on the world-famous hill climb at the Goodwood Festival of Speed.

“Racing the new Focus ST against the virtual one was a first for me. I had no idea who was in the lead so I was ecstatic when I realised I’d won,” Collins said. “The Focus ST has always been a great driver’s car but the new version is even more responsive and rewarding.”

The race was shown live on giant screens to an audience of tens of thousands at the festival, with visitors later able to set their own time on Gran Turismo 6 simulators on the Ford stand, where the first diesel-powered version of the new Focus ST was revealed by Jim Farley, Ford executive vice president, Global Marketing, Sales and Service and Lincoln, and the famous creator of Gran Turismo®, Kazunori Yamauchi.

The game replicated the conditions and features on the day itself as closely as possible – right down to the tyres. That attention to detail made for a tight contest with the real Focus ST posting a time of 1.05:13, with the virtual model only a tenth of a second behind, covering the climb in 1.05.23.

“It was a very close race and such a buzz competing against a real car and driver,” said Somodi, a graphic designer who is also a lifelong Gran Turismo fan. “The virtual Focus ST looks, feels and sounds just like the real thing. Gran Turismo 6 is very impressive.”

You can see more images from Goodwood and the race here.

Follow this link for further videos, images and a full press release on the new Focus ST that delivers new chassis control technologies, re-tuned suspension and steering to help deliver a driving experience that is even more responsive, balanced and refined.

Find out more about the Focus ST.

Email or Call Me BackBook a Test DriveBook an Appointment